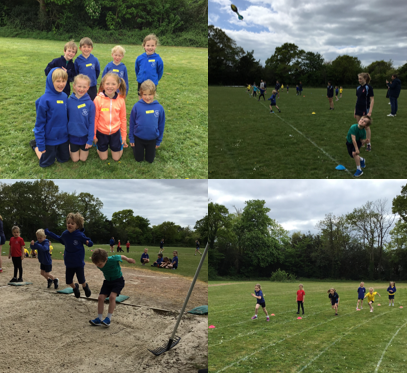 The first PSP competitive sports event of the summer term saw a team of eight KS1 pupils head off to Priestlands this week to take part in the first of three athletics events.

The ‘Quad Kids’ format gives pupils the chance to compete in four disciplines: individual running, throwing, jumping and relay, with school teams rotating around events together, allowing athletes to focus on achieving personal bests rather than competing directly against other schools. Each distance/time achieved over the afternoon is recorded and contributes to an overall team score allowing teams to be ranked at the end of the event.

Team MOSPS were all smiles as they set off and the sun was smiling too! All of our athletes were keen to give their best and to have fun!

It was straight into the 50m sprint for our team and everybody hurtled down the track as fast as they could, notching up some great times to contribute to the overall score. Next up was the ‘Vortex Throw’ and once again each member of team MOSPS gave their all, attaining some impressive distances.

It was a similar story for the 150m run, the standing long jump and the boys and girls individual 4x100 relay events. Mrs Rand said that she could not have asked for any more from any of our athletes, who each gave 100% and supported one another’s efforts all afternoon.

The event closed with a whole team ‘cannon’ relay – the organisation of which was rather like herding cats – and I think it is fair to say that everyone (including the organisers) was exhausted by the time they reached the medal ceremony.

With Brockenhurst coming 1st, Our Lady & St Joseph’s coming 2nd and Beaulieu in 3rd spot, there were no medals for MOSPS this week, but everyone can be proud of the effort they put in to each event. The PSP focus for the event was ‘Teamwork’ and Heidi and Joseph were awarded the Teamwork wristbands, so a special well done to them.

Next week it is the turn of the lower juniors to hit the athletics field.