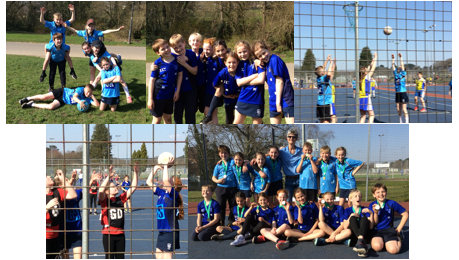 On the sun-drenched courts at Southampton Sports Centre, it was an action-packed, exhausting and at times nerve-wracking day!

Beta (the B Team) drew a tough Pool and after their initial four matches were placed in Group 3 for the post-lunch deciding matches.  After a tight first match, they really found their form and stormed their final two matches 7 – 0 and 12 – 0.

Unsure of the outcome of the Group, with everyone having lost one match, they were jubilant to be named the Winners (on goal difference) and were awarded with very well-deserved Gold Medals.

Alpha started the morning slowly (and nervously) and it took to the second half of their first match for them to start firing.  They went on to win that 8 -2 and cruised through their next two matches winning them 14 – 0 and 23 – 0 respectively.   Having Won their initial Pool, they went into the Top Group for the afternoon matches, where they were up against the Winners of the other two Pools and the two best Runners-Up.

Their hard work and training, and at times sheer and utter determination were fully on show as they won all their matches and were justifiably crowned New Forest Champions and have now qualified for the Hampshire Cup in June.  Throughout the day, Alpha scored 91 Goals and conceded 14!  A quite outstanding achievement.

Huge Thanks to all the parents (many who took the day off work) who supported the children so wonderfully and especial thanks to Mrs Mellor for managing Beta quite perfectly all day.