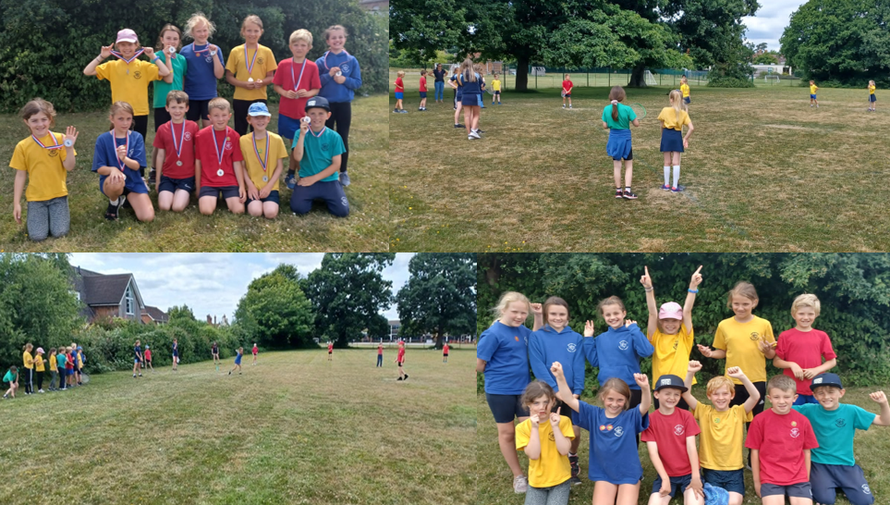 12 of our Yr 3-4 pupils went straight from their Sports Day event to Priestlands for the first of two Rounders competitions – the closing events of the 2021-22 competitive calendar.

6 schools were split into two leagues, with each team playing four matches over the course of the afternoon. Mrs Rand said that our team were equally amazing batting and fielding, and that the match scores were pretty tight in every game. There were certainly lots of rounders scored and plenty of excitement for the spectators and supporters. In league 2 Pennington squeezed into 1st place, with  Beaulieu 2nd and William Gilpin 3rd and in league 1 the results were VERY close between the top two positions. MOSPS won their first three matches, beating William Gilpin, Our Lady & St Joseph’s and Beaulieu, losing out to Brockenhurst in their final match by ½ a rounder and this was the difference between 1st and 2nd place.

Our fantastic team totally deserved their silver medals, having scored a huge number of rounders and been impressive in the field. How they found the energy after all those races in sports day, I don’t know?!

Bobby and Chloe were picked out by the Priestlands staff for this week’s sporting focus: Respect, so a special well done to them!

Thank you to Mrs Rand for coordinating the team, to all the parents who transported and supported and, of course, to our brilliant Yr 3-4 pupils.

Next week it is the turn of the Yr 6s.