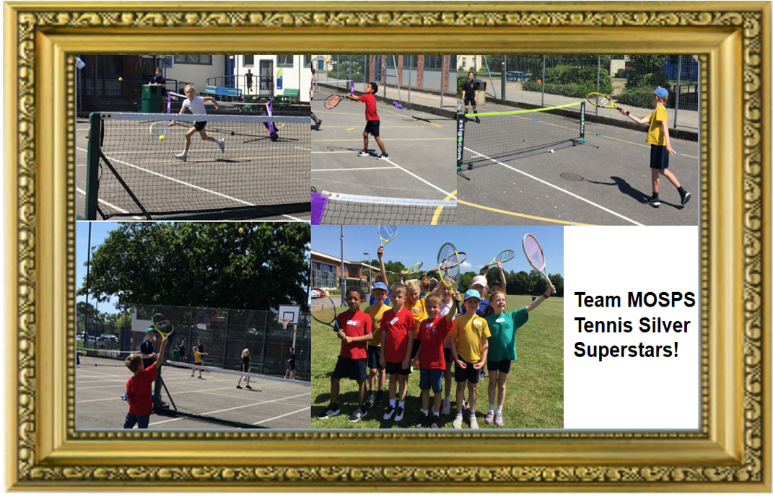 On the sort of afternoon Wimbledon fans dream of, three teams of excited Yr 3-4 pupils, racquets in hand, set off to Priestlands for the Lower KS2 Tennis Tournament.

Under a VERY warm sun, players from five schools each played four rounds of matches in a format where EVERT point counted towards the final score. At 8 minutes a match, the heat really took it out of the athletes, but they kept hydrated and performed brilliantly throughout the event.

Each team notched up good numbers of wins over the four rounds and earned Team MOSPS a whopping 737 points! This fantastic achievement placed us in joint first place with Pennington Juniors, and with no time for any ‘play-off’ matches, the statistical skills of the tournament organisers were called into play. They compared the point tallies of both schools (from the matches between them) to decide the overall winner and with Pennington accruing 10 more points than us, they were awarded gold medals and Team MOSPS were awarded 2nd place and silver medals.

Mrs Rand, who had to oversee all teams, was full of praise for how our tennis players performed, both on and off the court under a scorching sun. It was a fantastic afternoon, enjoyed by everyone who went and the efforts of Team MOSPS definitely deserved those second place medals. Well done to all the players for their amazing achievement!

Thanks, as always to Mrs Rand for her coordinating and coaching skills, and, of course to all the parents who helped to transport the children to and from the event.

Next week it is the turn of the Yr 5-6 Tennis team.