Great Rugby From MOSPS Girls Ends The Term In Style

The Autumn term’s competitive sporting calendar was brought to a close with the long awaited Girls’ tag Rugby competition, which saw all of Coach Brown’s club members given the chance to play competitive rugby for the first time. MOSPS were given the chance to take two teams to the event, so on Wednesday this week 14 excited girls set off, ready to pit their skills against teams from our local area.

Like the Yr 3-6 event last week, the afternoon began with group stages before progressing onto a final knockout matches. It was clear from the start that the standard of rugby was very high and our girls went up against tough competition in every match. Team A got off to a great start, beating Brockenhurst 6-2 and Lymington 4-1. Their final group game against Beaulieu was a tight affair, ending in a 4-4 draw.  Team B also started well, with a 3-0 win over South Baddesley, but then, despite scoring some super tries, lost their next two matches 4-2 and 4-3.

Thanks to Team A’s points and Team B’s high try-rate, both teams progressed to the medal play-offs. Team B were drawn against Beaulieu in the play-offs for third place and Team A were drawn against Pennington in the play-offs for the top spot. Both matches were really entertaining, if a little physical. Team B lost their game so achieved 4th place overall – an amazing achievement for a first competitive run-out. Team A drew their match against Pennington, so top spot had to be decided on try-difference. After the try tallies had been calculated, Pennington were awarded the gold medals and our girls placed a well-deserved 2nd.

Both teams should feel very proud of their performances over the afternoon. They played with spirit, with determination and, most importantly, with smiles on their faces. Coach Brown and Mr Langton were definitely proud of all the girls achieved and enjoyed seeing them put into practice the skills they have been developing at the club.

A huge thank you to all the girls for representing the school so well, to Coach Brown, Mr Brown and Mr Langton for all their hard work in running the club this term and for managing the teams on the day and to Mrs Rand for overseeing both squads. Thanks also to all the parents who helped with transport and/or supported the girls. What a fantastic way to round off the autumn term and the year!! Thanks to our Tag Ruby teams and everyone who has represented the school in 2022, you’ve all been amazing!

In the New Year, we kick off with KS1 Swimming. 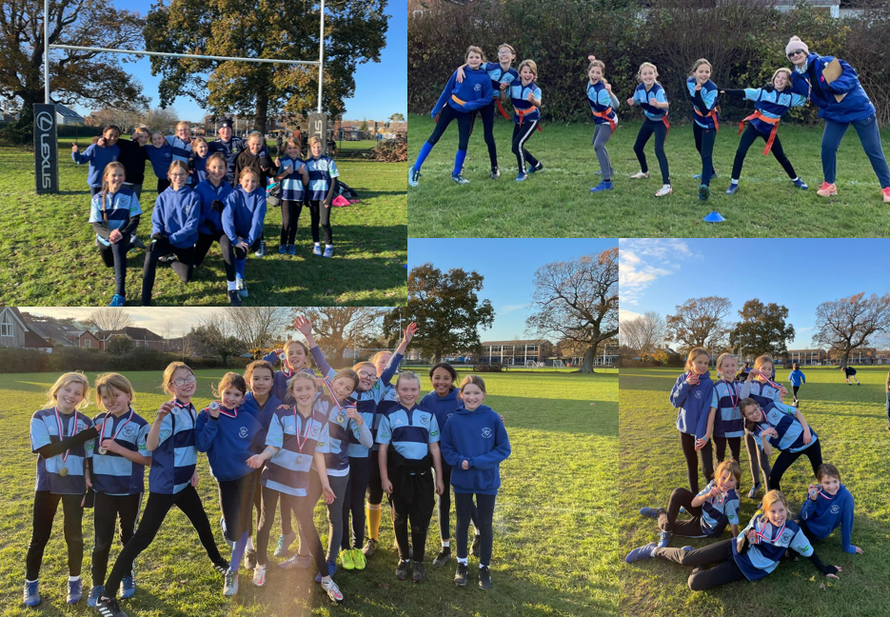