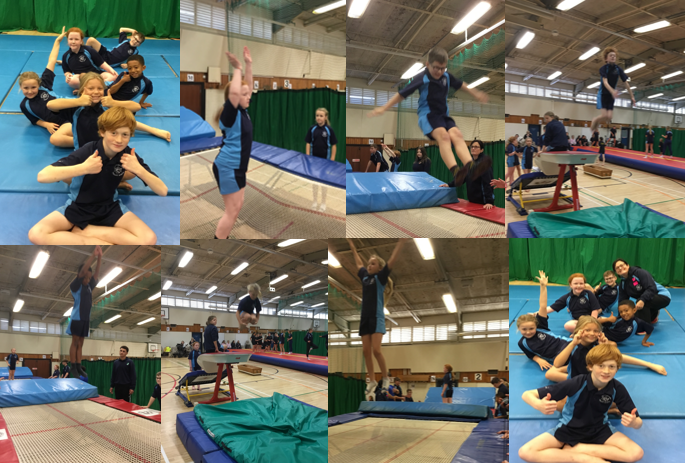 This week, it was the turn of our Yr 5-6 Gymnastics team to head out to Priestlands for their afternoon of springing, vaulting, tumbling and balancing. All six pupils were keen to show off their rehearsed routines and headed off full of excitement.

Just like the Yr 3-4 event last week, the afternoon was split between competition and coaching: providing teams of competitors with the chance to perform their routine to music before being coached by staff and young Sports Leaders on the Air track, trampolines and vaulting horse.

Prior to the event, Mrs Cummings worked with the team of six on two routines and it was great to see how enthusiastic everyone was to make the most of the limited time they had for rehearsing. The gym mats have never been in so many different rooms before, as finding space for rehearsals was often quite a challenge.

Everyone had an amazing time performing their routines and then having a go on the trampoline, vault and Air Track. Mrs Cummings and Mrs Rand were really impressed with the way that all six of our gymnasts performed across the afternoon. They reported that the routine went very well and that all the children thoroughly enjoyed the gym equipment and coaching from the Young Sports Leaders.

In the competitive part of the event, the routines were marked on rhythm and synchronised movement, alongside the sequencing of key skills of tension, extension, control and creative travel.

While we did not place in the medal positions this time around, the children should feel really proud of their efforts. A special well done to Tyler & Lacey, who were awarded the ‘Creativity’ wristbands from the Priestlands school staff. Beaulieu won the event, with South Baddesley coming a close second and Pennington took third spot. Well done to those schools.

Huge thanks to all our pupils for their effort and attitude on the day and of course to Mrs Cummings, for her training; Mrs Rand for managing the team, and for all the parents who helped with transport.

If you would like to see a video of the routine, it can be found here: https://milford-on-sea-cofe-primary-school.primarysite.media/media/yr-5-6-gymnastics-routine-1

Next up is a non-competitive afternoon of Gymnastics fun for KS1.