Tries-a-Plenty in a Tremendous Afternoon of Tag Rugby

This week players from Mr Willis’s Tag Rugby Club got the opportunity to test their growing skills against players from other schools in the annual Yr3-6 Tag Rugby Event. A total of 17 excited players set off on a bright, but cold afternoon to represent the school in two squads: a Yr 3-4 team and a Yr 5-6 team.

Despite the sun attempting to peek through from time to time, there was a winter chill in the air, but with our players moving from one game to the next in quick succession, there was no time to feel the cold! It was a high-paced, action packed afternoon of rugby and a thoroughly enjoyable event for all involved.

Our upper junior team played some superb rugby over the afternoon, remaining unbeaten after their four groups stage matches with three wins and a draw. This meant they went through to the knockout stages as winners and put them straight into the top spot play-off. Team managers Mr Crouch and Mr Tompkins-Douglas must have been really proud of the effort the boys put into each one of the games.  There were plenty of tries scored and too many tags to mention, so they fully deserved their place in the final. This was a very close match, with only one try to separate the two teams at the final whistle. Pennington came away 2-1 winners and team MOSPS placed second to receive well-deserved silver medals. The overall Yr 5-6 results were Pennington in 1st place, MOSPS second and Beaulieu third.

For many of our lower junior team, it was the first chance to put all the skills they have been learning at Tag Rugby Club into play.  They had 7 games to play in quick succession over the afternoon, so it was a real blow to lose one of their players to a nasty nosebleed early on. With no substitutes to draw on, they all had to put in a real shift - There were a lot of tired legs by the end of the afternoon! However, they played really well over their group matches, ending up in the play-offs for third place against Lymington. The final results were Pennington Juniors in first place, Beaulieu in second place and Lymington Juniors taking the bronze medal spot just ahead of team MOSPS. A special mention needs to go to Mrs Howell, who had to take over the management of the team in Mrs Rand’s absence. She told me that the team showed great determination and resilience; and that she was really impressed with the way they pulled together as a team, cheering each other on and scoring some fantastic tries.

All in all, it sounds like it was a cracking afternoon of sport, so a huge well done to everybody who took part! A special well done to Tyler and Jago, who received the ‘Teamwork’ wristbands in recognition of their contributions to the afternoon. Also, a MASSIVE THANK YOU to Mrs Howell, Mr Crouch and Mr Tompkins-Douglas for stepping in and managing team MOSPS. Mrs Rand said that they were all amazing! Thanks too, as always, to Mrs Rand and to all the parents who helped get team MOSPS to and from the event.

Next week it is the turn of our Girls’ Tag Rugby team to test themselves competitively. 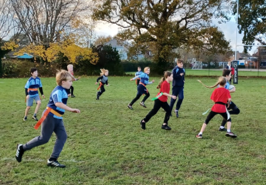 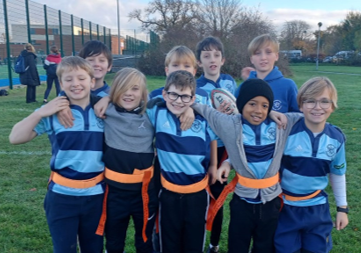 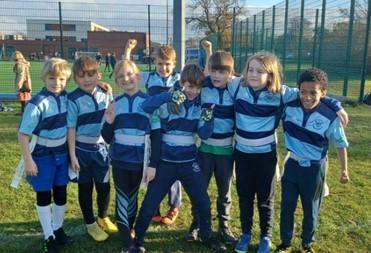